…and so they pressed on…

“Here, at the end of the millennium, and extraordinary thing is happening in sports. There is a new kind of athlete, participating in a new kind of sport. This new athlete competes not for fame, or money, or career, but simply for adventure and for the experience of living–if only for the span of the event–at the very brink of human strength and endurance. For this, the athlete will travel literally to the ends of the earth, to places so desolate and so devoid of the comforts of modern life they might be from a distant time, or another planet. 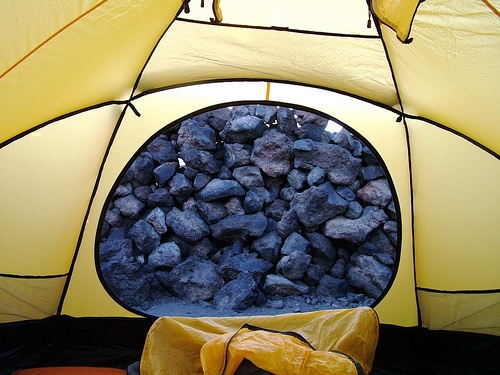 What are these athletes looking for?

They are trying to discover what they are capable of doing as men and women without the assistance of the modern world. They want to know extremity, because there is life in risk, and nobility in the breach.

They want to know nature, not the tame woods of the park, but nature raw, where exposure is not an accident, and where predators run free.

They are looking for all this and more, everything within their skills and fitness, as a sport and as a portal into this very beautiful and alien garden. And they want to share it with teammates and friends who embrace their vision of a life lived fully.”

“(Adventure racing) has its roots in the childhood longing of (Gerard) Fusil, a man born 100 years too late. “I always dreamed,” the fifty-year-old French journalist told me once, looking out across the Madagascan dawn, “of being an explorer.” Buoyed by that dream, he designed a race that is the modern equivalent of colonial adventures past. Like Stanley and Livingstone, Byrd and Peary, and legions of other explorers, competitors race through primitive lands, unaided by motorized transport.”

~ Excerpted from “Surviving the toughest race on Earth,” by Martin Dugard, a wonderful story of the birth of AR, and the Raid, in particular. 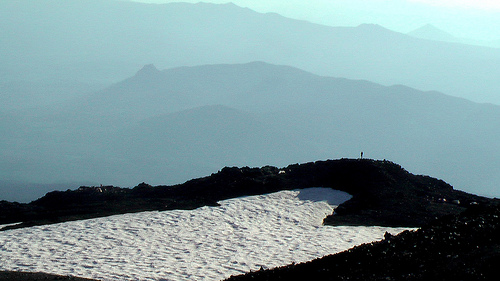 One of the coolest things about AR is that you’re never bored, and you’ve never learned or mastered everything, because you don’t know what is coming your way. No matter how how much biking or riding you’ve done, every course is different, every day–or even a different hour–brings new weather, and every obstacle challenges you, both internally and externally, or you could say physically or mentally, or even possibly spiritually.

If you don’t want to run, then bike. if you don’t want to bike, then kayak. If you don’t want to kayak, go climbing… you’re never bored, because there are almost unlimited possibilities. And… you can never learn too much, or know too much, as evidenced by the fact that many of the top racers in the world are in their forties–well into their forties–and in some cases, even older! SMART racers will ultimately triumph over young (or perhaps inexperienced is a better term), fit racers. Does fitness matter? Absolutely, but brains matter more.

With all that said, the FARTS are on a continuing quest for knowledge, not to mention new experiences (and a good time!) and so, last weekend, they headed out to climb a mountain.

Matt Wilson, a friend of Lisa and Dave’s, and a member of the Spokane Mountaineering Club, put together the expedition, and so on Friday, after a couple of hours of delay involving organizing gear, picking up contacts, getting Morgen, getting lunch, etc, Lisa, Morgen, Rick, Matt and Dave set out for Mt. Adams, which at 12, 272 feet, is the second highest peak in the Cascades, just behind Rainier.

The weather was warm, or perhaps some would say hot, topping the thermometer at 106 degrees near the tri-cities, and would remain high throughout the weekend. We stopped for a Mexican dinner in White Salmon, near the banks of the Columbia, and then started heading uphill toward Trout Lake at the base of the mountain.

We stayed at the Trout Lake Hotel, a quaint, well done little place, that served wonderful, sweet potato waffles for breakfast the next morning, and then the adventure began!

Stop 1: The Ranger station, where we picked up our climbing passes, and got some last minute advice from Jean, the crusty ranger.

Stop 2: The South Climb parking area, Route 183! It’s about a 30 minute drive from town, on roads that got rougher and narrower as we went, but thankfully, it got a few degrees cooler, down to just over 100 by 9:30 am. We started the gear fiddle, making sure that everyone had everything they would need (more on how this isn’t a fool proof procedure later) and divvying up all the gear. Thankfully, Matt had a bunch of extra gear, including a couple of great packs for Dave and Lisa, tents etc.

I must digress slightly here to say that surprisingly, once you have your gear, it’s a relatively inexpensive hobby… we had dinner Friday and Sunday, split one hotel room five-ways, bought a $15 climbing pass, and that was it! Now, the gear can get pricey, but at least this trip, Matt was able to furnish us with the things we didn’t have.

At 10:00 am, we started up the hill. Let me put it in perspective: Saturday’s hike in to the high base camp (named the Lunch Counter, or the Lunch Box, according to Lisa) is only 5 miles… no biggie, right? So what… 5 miles? cake, I say… cake. 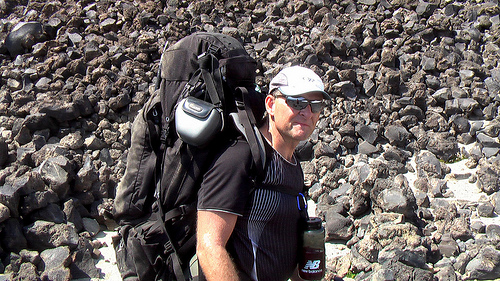 Let me tell ya… 5 miles uphill–and in some parts, REALLY uphill, in heat over 100 degrees is a challenge. Add in packs weighing upto Dave’s idiotic 70-odd pounds, and thus, the title of this post: In typically understated British fashion, there were times when it was all I had to set a goal 50 yards up the trail, and put one foot in front of the other until I got there, take a breath or two, and repeat. How hard was it? It took us 5 hours to make the hike, with only one real fifteen minute rest break, and we were moving! After the last 3/4 mile trek through the snow field, Dave was close to done/spent, though everyone else seemed good to go. Thankfully, my recovery was pretty quick, and I was no worse for wear after 15 minutes or so. 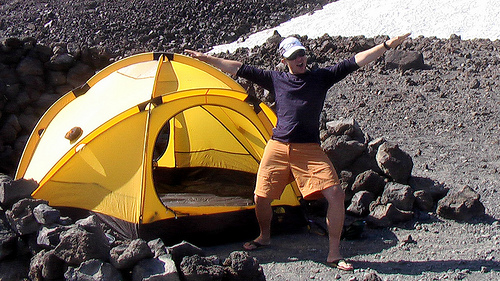 We set up camp and spent the remainder of the daylight getting water, cooking our surprisingly good dehydrated dinners, drinking a little wine and taking pictures of the amazing sunset. Sadly, there was a bit too much haze from the forest fires in the area, so pictures of the other peaks (Hood, St. Helens, Rainier, Baker) were only so so.

This was Matt’s fifth time up Adams, so he was a veritable font of knowledge, and was very safety conscious. Dave had had a little climbing experience back in college, and Morgen and Rick had done some hiking/climbing, but we were basically novices, so Matt’s leadership was greatly appreciated. Learning the ins and outs of cooking on the mountain, using “Blue Bags,” filtering your water etc. were good refreshers for those who had done them before, and real eyeopeners for those who hadn’t!

Mt. Adams is notoriously windy and cold, but we lucked out with high temps, and essentially no wind on Saturday, and as we went to bed, the full moon was coming up–to quote Matt, it was an epic evening!

Rain had been predicted for Sunday, and the wind picked up slightly just after midnight, and for those of you not used to sleeping in a tent on the rocks, it takes some getting used to. The first rain drops hit at 3:30 am, but aside from waking us, they held off, thankfully.

3:30. Did I mention 3:30? That’s am, BTW… Well, Matt decided that since we were awake, and the moon was up and bright, we might as well get going, so hot chocolate, oatmeal and bagels were downed, packs were lightened to a minimum, and just after 5:00 am, we headed toward the summit, some 3000 feet and 2 miles up.

Within 30 minutes, the sun was coming up, and we reached the base of the glacier just in time to watch a glorious mountain sunrise. We put on crampons, pulled out our ice axes, and started up the snow field.

It took us about 60 minutes to clear the glacier, where we took off our spikes and made our way up the scree slope to the false summit, named Piker’s Peak, which is at slightly over 11,000 feet. This is where we met the famous Mt. Adams wind, in the shape of a 35 mph “breeze.”  After the plateau, you get your first view of the summit, still 1000 feet or so above you, and at this time of year, the final pitch was more rock than snow, though you have to actually descend about 1/4 mile down and across another glacier to reach the final headwall.

Stop 4: 3 hours after we left camp, we reached the summit, and found out that the wind on Piker’s Peak was only a breeze. Now, it howled up the hill at about 50 mph, and made the handstand photos a challenge to balance.

After walking around the summit and taking some of the attached photos, we started our descent. After traversing the glacier, we reached the main snowfield, and got to glissade down, which basically means sliding down a steep snow field on your rear end, trying not break your legs or other body parts. In all, it was a blast! 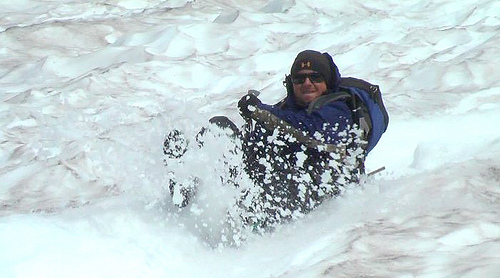 We broke camp, dividing up the load a bit more evenly, and started our hike out, which, let me tell you, is WAY faster going down hill than up! When we left our camp on the mountain, it was about 58 degrees, and by the time we reached the base, it was back over 100. Quite a change!

We stopped for much appreciated burgers and chocolate milk, and then made the drove back, arriving back in CDA by 10:45 p.m.

Overall, it was a great weekend, and we learned a TON! We hope to join the Mountaineers ourselves and take several of the classes, so that we can attack Rainier and some of the other peaks next season. It is an addictive hobby, as there is something really special about reaching the top, with the great efforts required. It was also a heckuva workout!

The skills we learned are going to help us, especially when we move to longer, more challenging races. Lisa put this as one of the top 10 things she had ever accomplished, and I would have to say it was pretty close in my books too! 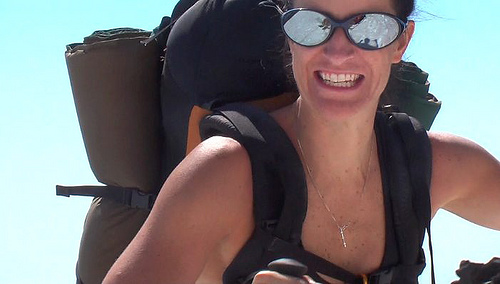 We can’t wait to share our new discovery with the rest of you, and look forward to sharing some vino with you on top of a mountain soon!

Good training to all of you!

3 responses to “…and so they pressed on…”